Zach Veach ‘Overstoked’ About His ‘Job’ in IndyCar 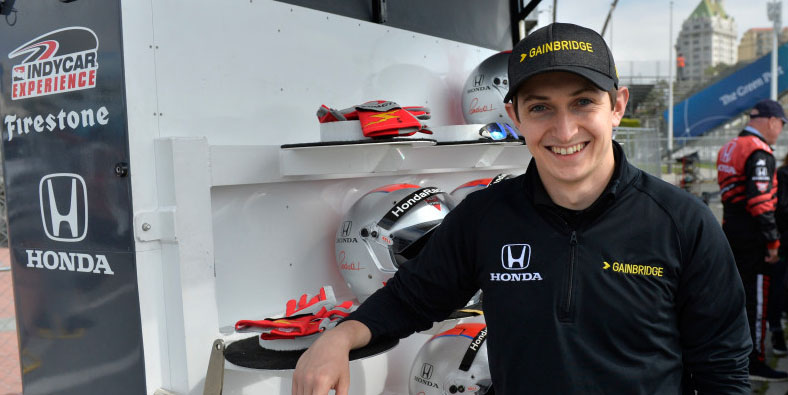 Zach Veach ‘Overstoked’ About His ‘Job’ in IndyCar

Standing on the Acura Grand Prix of Long Beach street course, waiting to give scary-fast rides to members of the media, NTT IndyCar driver Zach Veach on Tuesday looked more like he belonged in high school.

But the baby-faced 24-year-old showed he’s no kid in 2018 when he took fourth place in his first taste of this prestigious event as an IndyCar competitor. He previously finished ninth and second here in 2013 and 2014, respectively, while driving in IndyLights.

That showing last year accounts for just some of the emotions being experienced these days by the young man from Stockdale, Ohio.

Veach comes off as genuinely thrilled to be in his second season as a full-time IndyCar driver. When he was asked how stoked he is about his career, he made up a word to kind of magnify its meaning.

“I’m an overstoker for sure,” he said, smiling. “I’m just so excited to be here. This has been a dream of mine since I was about 4. So 20 years later, to find myself starting my second year in IndyCar, it’s incredible.”

Veach, who drives for Andretti Autosport, couldn’t stop himself.

“And all these little things keep happening that just blow me away,” he said. “Last night I got to throw out the first pitch at the Dodgers game, so I have to pinch myself all the time that this is my job.”

The Acura Grand Prix of Long Beach is upon us again and will be contested April 12-14. The race has, and likely always will be, a very popular event among drivers. Count Veach among them.

“The people that come out is incredible, from the fans to the celebrities,” he said on media day. “This is one of those events that just feels like it has that special aura around it.”

The course is ultra-challenging, he intimated, which seems to add to its popularity.

“As a driver, the track is so much fun,” Veach said. “I mean, it’s a fast-flowing street course. Turn 1 all the way through Turn 8, I mean, all these corners, you’re so committed to getting so much speed through that, that if you get it wrong by half an inch, you’re taking the right side or the left side of the race car off.

“It’s just full commitment. And this place allows that and rewards the guy that is able to risk it the most.”

The fourth-place here was Veach’s best result in 2018. He seemed a bit disappointed that the first two races of this season did not go well. He was 14th at the Firestone Grand Prix of St. Petersburg and 22nd in the IndyCar Classic at the Circuit of the Americas in Austin, Texas.

“We had a mechanical issue at St. Pete, which explains speed loss,” Veach said. “And COTA, we qualified ninth and just had a bad start, got hit off the track and basically spent the rest of the day running around at the back.

“Luck hasn’t been what we’ve wanted, but the speed has definitely been there. We just have to turn things around in Birmingham this coming weekend and have a good Long Beach Grand Prix to get things back on track.”

The Honda Indy Grand Prix of Alabama is Sunday in Birmingham.