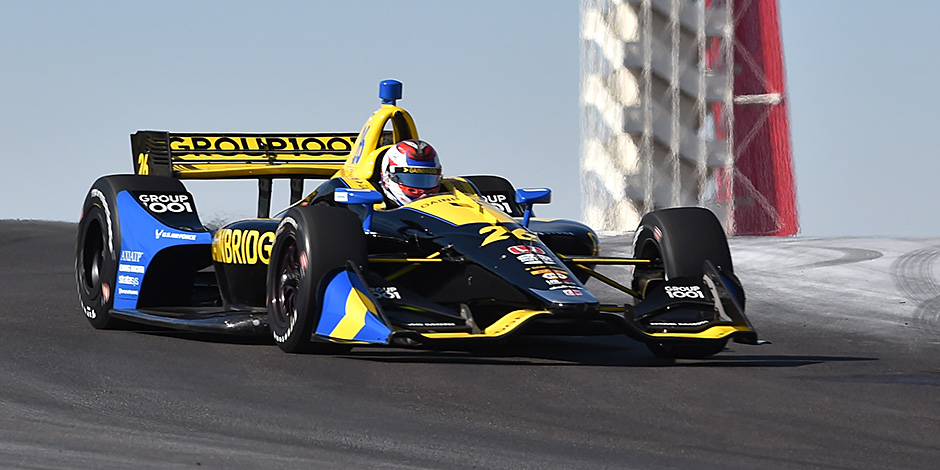 He understood the adaptation to a full-time ride in the NTT IndyCar Series was going to be methodical and require patience.

That’s why Zach Veach came away encouraged from last season, his first in a three-year contract with Andretti Autosport. The 24-year-old Ohioan finished 15th in the points but is upbeat about the upcoming year because of the way he surged late in 2018.

After only one top-10 finish in his first 11 starts of 2018, a career-best fourth at Long Beach in April, Veach had four consecutive top-10 results including a fifth at Gateway, sixth at Pocono and seventh at Toronto. He was also 10th at Mid-Ohio.

What specifically resonated was his visit to Gateway Motorsports Park for the Bommarito Automotive Group 500 presented by Axalta and Valvoline. He considers that fifth place on the tough 1.25-mile oval his best race so far.

“Just because of the adversity of not being able to qualify (due to rain), starting 16th, we had two great restarts. I think we made up five spots on the two restarts,” Veach said. “I felt in control that weekend, just as far as the line I was running with other guys. I was planning the strategy ahead in my head. I made the decision to ditch fuel savings at the end and elected to push hard and get a splash-and-go (pit stop).

“I felt complete. Even though that was a fifth place, if one thing would have went differently, that would have easily been a win. For me, that was the most complete drive I felt of the year. That’s something I hope to keep replicating.”

Veach reiterated during the late-season stretch that his goal was to be consistently running in the top 10. He expects even better results in 2019 and prepared extensively in the offseason to achieve that objective in the No. 26 Honda, which welcomed a new sponsor in Gainbridge, a new venture from his 2018 sponsor Group1001. Gainbridge is also the presenting sponsor for the 103rd Indianapolis 500.

When he wasn’t working out in a gym alongside teammate and 2018 series runner-up Alexander Rossi as well as five-time and reigning series champion Scott Dixon of Chip Ganassi Racing, Veach was studying each of his 2018 races in the offseason.

“I must have spent probably a solid five weeks in the shop, just being there every day, doing my own data and my own notes,” Veach said. “I went back to every qualifying session, race session, with my own laptop. I took my own screen shots from that with compares to my teammates and basically just wrote down a study guide for each track.

“Turn 3 through 5 was good, Turn 6 was what was killing you, three-tenths (of a second) in qualifying,” he cited as an example of his notes. “So for me, it’s cool because when I show back up at St. Petersburg (for the March 10 season opener), I’m like, ‘I know I don’t have to worry Turns 1 through 3, (Turn) 4 we have to improve, the rest is OK. Now I have a hit list of every track I’m going to, to close that deficiency that I had last season. It’s kind of a methodical approach, the same approach that I had in Indy Lights that took me from being seventh in the championship to coming close to winning the championship the next year.”

Although he signed that multiyear contract, Veach never considered that as security in learning the series. Like all drivers, he has high expectations for himself. He’s still hungry for not just podium finishes, but a first series victory.

“I still don’t look at it that way,” he said of having a three-year ride. “I look at the second year as the year where you have to build upon your first year. I think we have a good foundation to improve on. I’m excited to say the Gainbridge deal at Indianapolis is a four-year deal and I have two years left on my contract, so hopefully that means something going forward. But we have a lot to accomplish until then.

“We know what our goals are. We definitely have to get on the podium a few times this year. That would be incredible. That’s what we’re working towards. The way I kind of notice Indy car racing how it goes, as long as you’re running in the top 10, you’re in the fight. Anything can happen to put you forward. You’ve just got to make sure you’re continuously bringing yourself to that position to take opportunities to move forward.”

He’s obviously circled the Indy 500 as even more important because the primary sponsor on his car is also the presenting sponsor for “The Greatest Spectacle in Racing.”

“It would be incredible if we could go and win it,” Veach said. “The presenting sponsor for the Indy 500 is kind of new and I don’t think anyone has ever won as a presenting-sponsored car yet, so if we could do that it would be special.”

So, too, would be seeing all that hard work in the offseason pay off. He’s confident on ovals, suggesting that’s where he has his best opportunities at that first win. And he admits there’s plenty of room for improvement on road and street courses, although he asserts he’s closing that gap really fast.

“If we can have a second year where we’re consistently in the top 10, breaking top-fives now and then and maybe even get that first win,” Veach said, “Year 3 sets us up perfectly where we need to be.”

Zach Veach 'Overstoked' About His 'Job' in IndyCar