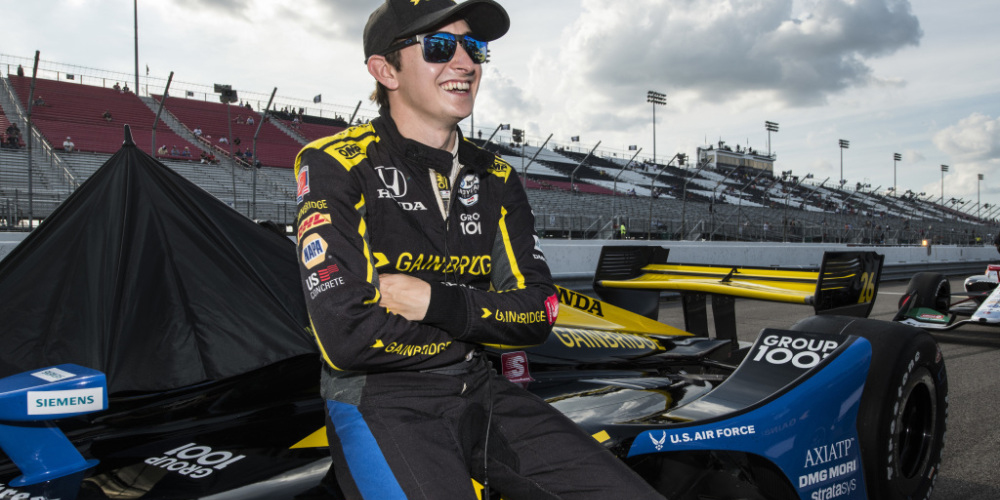 Zach Veach’s smile precedes almost everything that takes place in his world. The third-year IndyCar driver casts a bright light with his personality when things are going according to plan. It came to the fore when he arrived as a rookie in 2018. Less so, in his sophomore campaign with Andretti Autosport, as that smile was largely extinguished once the ease with which he drove became distant and disconnected.

“That first year we didn’t have any expectations, so it was just driving for fun,” he told RACER. “And then, when some good things happened, it was turning everything up for the second year with pressure applied to yourself, and from your engineer, and all of us to repeat the good stuff we achieved the first year, but do better and to try harder. And the opposite is what happened. It made things worse. We tried to close the gap to the leaders by pushing too much, and lost sight of what worked in the first place.”

Entering the final year of his contract with the powerhouse team, the Ohioan will face more pressure than many of his rivals throughout the shortened 2020 NTT IndyCar Series season. Down from 17 races to 14, Veach has the clearest objectives imaginable as he readies himself for the green flag tonight in Texas: Recapture his 2018 form, impress Gainbridge, the sponsor that brought him into IndyCar, and earn a new deal to stay with Andretti Autosport for 2021 and beyond.

If he’s smiling throughout the year, he’s likely safe. If it’s wrinkled brows and thousand-yard stares, Veach’s IndyCar dream could be over after the season finale in October.

“It’s hopefully a new start in a much more fun year,” he said. “That’s the big thing, just enjoying it, having fun again because the first year was a lot like that. Then you put so much pressure on yourself in the second year that, it sounds dumb to say, but you stop enjoying what you’re doing in a way because you’re thinking about all the negative sides of it instead of enjoying what you’re doing. So I think this year, it’s just have fun with it because we were doing well when we had fun.”

Surrendering himself to the most basic part of the job — driving a race car — is another adjustment Veach has made in reaction to the mental approach that didn’t work last year. The late-season introduction of New Zealand’s Mark Bryant as race engineer of Veach’s No. 26 Honda is another significant direction change that inspires faith.

“I’m thinking about things that I have direct control of,” he said. “I think for me, mindset was a big part of it because it was easy to put all this pressure on yourself and then be frustrated quickly when you know you have adversity with a few things. A lot of it too, I’ve got to give credit to the people that I have around me. Mark Bryant, he’s back to be my engineer this year. I’ve never really worked with someone that has the same mannerisms as me and kind of the same thought process in a way.

“I think it’s going to be really good for us because Mark and I both were relatively new to the IndyCar world, so we’re both just eager to show up to the racetrack. We’re excited to see what each day brings. Whether that be good or bad, we’re still just enjoying the sport that we love. That’s contagious. When you’re around people that are enjoying every moment and then they’re happy to be there, it lifts the whole team up. We’re looking forward to getting things started.”

As two young men with plenty to learn, Veach is inspired by Bryant, who enters his second season as an IndyCar engineer and doesn’t have decades of experience to draw upon when they make a wrong turn with chassis setup. If they’re going to succeed, it will come from intense collaboration and honesty.

“It’s, for me, being a little more versatile with the car, a little more flexible,” Veach said. “I’m lucky to have Mark on that side because he comes from the Indy Lights mindset of working with younger drivers: ‘OK, let’s just do what you need to be comfortable’ because when you’re comfortable you’ll go fast for what works for you. I’m looking forward to that because it’ll be fun to get back to steering things in my own little direction in a way.

“And there are times where we’ve been completely lost on setup. He’ll look at me and say, ‘What do you think,’ and I’ll look at him and say, ‘I dunno…what do you think?’ And we’ll laugh and then realize we’d better come up with a plan, an agreement on what we’re going to try, and I love that. We aren’t always going to know the answers, but to make this thing work, we’re going to make it work together.”

Despite the vast potential contained within the Veach-Bryant combination, the No. 26 Honda will have bad days throughout the season. It’s in the low times ahead where the final part of Veach’s strategy will be crucial to avoid the pitfalls that blighted 2019.

“Honestly, I look at it as that’s probably more realistic of a thing that you have to fight through anyway. Everyone has some part of their season where it’s like that,” he said. “For me, the big thing that I learned was stay off social media, stay away from where everyone can voice the random opinions. I think that was part of some of it too — you have that that rookie year where a lot of people start believing in you and they’d get behind you, and you put that pressure on yourself. You have a rough year and you start seeing all of the less-than-flattering comments about yourself on the internet. It’s like, ‘Well this is odd. This sucks.’ I think that’s the big thing, is just staying away from any negative influence so you can just focus on your program.

“Another thing is last year, we had multiple times where it was something completely out of our control, but yet I’m the one going home and beating myself up over it. So that’s another thing that we really have to think about if you lose, something mechanical happens, or you get taken out. You’ve got to look at it as, could I have done something different? Well, no, move on. That’s not your day. I think that’s another thing in having a lighter look on it all,  just a more enjoyable experience being an IndyCar driver.”

One of Veach’s more endearing qualities is the humility that comes from being raised on a farm where hard work was the currency of value within the Veach family. Expect to see that kid, embracing those homespun virtues, from Texas onward.

“You’re getting to do one of the coolest jobs in the world,” he said. “You should be enjoying it. That’s our main thing — enjoy every moment of it, and go out and kick ass like we used to because for me, that’s part of the enjoyment as well as being one of the quick guys. I’ve always worked to be one of the quick guys and this has been the first time that it’s taken a little longer than I thought it would. We’re trying to break that as quickly as we can.”