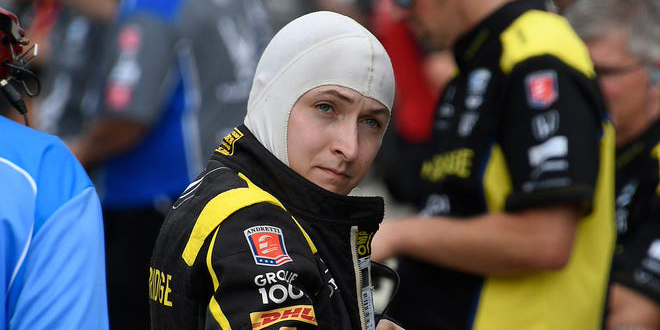 Zach Veach stood on the grid ahead of Saturday’s IndyCar season-opener hours after securing his best series oval starting spot.

But entering his third year at Andretti Autosport, still without a podium and just eight top-10 finishes over 34 races, it would be easy to imagine “patience” might not be on his mind. You might think starting fifth – ahead of Will Power, Ed Carpenter and teammate Alexander Rossi – would ignite a fire to take risks.

Veach had preached patience this offseason, at the series media day and even last week. But could he follow his own advice? But when your team owner, a series legend, approaches to offer advice, messages tend to hit differently.

“Michael (Andretti) came up to me and he said, ‘Keep it on track and you’re gonna be in the top three,’” Veach recalled.

Veach could have seen that as a jab at his two Texas performances — he nailed the Turn 2 wall both times — but this confident version of the young driver saw it another way.

“That was be big thing, that final kick I needed to put something together,” he said.

And in the end, fourth worked just fine. Once the checkered flag flew, the 25-year-old had led the charge of several drivers who drastically exceeded expectations – if not their own, then at least public perception.

Saturday’s one-day show featured most crew members – and even some drivers – riding the adrenaline of a 24-hour day while commuting to Texas Motor Speedway from a different time zone. Because of the circumstances, the “experience factor” was expected to be huge. And it was, with Scott Dixon, Josef Newgarden and Simon Pagenaud rounding out the podium.

And though Veach has driven under the Andretti umbrella for more than two years now, he’s rarely been the top dog. Just three times since the start of the 2018 season has he finished higher than Rossi, Ryan Hunter-Reay and Marco Andretti.

“The thing is, when you show up with a good race car, you know four or five others have a good race car, too, and that makes it tough,” Veach said. “You have to be able to decipher things from all this information and not let it overwhelm you. I can’t get carried away and jump into what Ryan’s doing, simply because I’m not happy with my car, because at the end of the day, he might not have a better car – he just has the experience to make it faster with his years.”

But the one-day show somewhat leveled the playing field, he said.

“The thing that makes Dixon, Ryan and (Will) Power so good, ultimately, is they’re super talented and fast guys that, after their first practice of the weekend, they’re able to go back to the truck and think about a bunch of different little tricks,” Veach said. “They’re really pulling from their experience for what they need to do in that next session to go faster, and a lot of us young guys’ notebooks aren’t as full yet. It takes it from a science experiment and turns it more into a pure driving experience.”