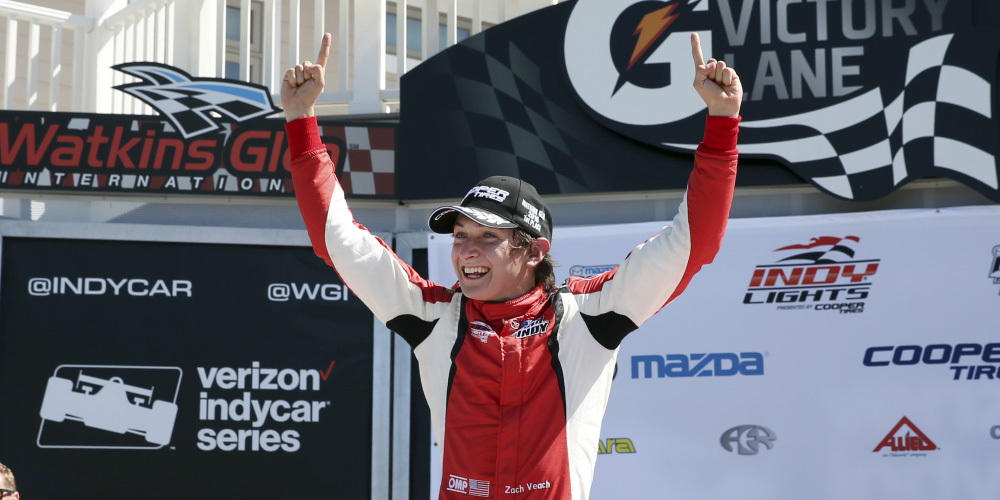 The story of how Zach Veach landed a life-changing deal to ride with Andretti Autosport for the next three years doesn’t begin where you’d think.

It wasn’t at Andretti headquarters or Indianapolis Motor Speedway or at a race track.

The story of the 22-year-old Veach’s union with the Verizon IndyCar Series team that has won three of the past four Indianapolis 500s begins at a church. It begins with a pastor.

Like most young men in his profession, Veach was a driver with a dream. Veach envisioned a life of chasing Helio Castroneves for Indy 500 checkered flags and of competing with Scott Dixon for season championships.

After more than a half decade spent ascending the ladder to the top of North American open wheel—most of it with Andretti—he, like so many others before and after him, got stuck on the final rung.

Aligning the stars on sponsorship and opportunity within IndyCar is a challenge that has foiled many talented young drivers, but Veach was determined not to be one of them. He worked relentlessly to find someone that would believe in him and his dream and that would help grant him the opportunity he craved.

But he kept coming up short. So many times, Veach thought he was closing in on a deal only to have the rug yanked out from under him.

“You’re jumping through all of these hoops and then time kills the deal,” Veach said. “Then you’re left with three months’ worth of work and nothing to show for it.”

That’s what made what happen in April feel so surreal. After years of phone calls, emails and knocking down doors that turned into dead ends, Veach needed a miracle if he was going to enter the 2017 Indy 500. Fittingly enough, he found one at church.

“Do you think there’s anyone I could possibly talk to?“ Veach asked him. “Anyone at all?”

As a matter of fact, Brockett told him, he did. Brockett gave Veach contact information for Dan Towriss, and Veach didn’t hesitate. He emailed Towriss, and Towriss, then head of the Guggenheim Partners, did what anyone in his position would do when someone he didn’t know was asking him for money.

“He said, ‘Who is the kid? And how the heck did he get my information?’”

Towriss reached out to Brockett, and Brockett assured him Veach was a friend. So Towriss gave Veach a call, and that was all it took.

The two immediately hit it off, and within three days of their first phone conversation, Towriss made Veach’s dream a reality: He was going to compete in the 101st running of the Indianapolis 500.

“I called him and said, ‘You’re going to the show,’” Towriss remembers.

Three days after the 500, and Veach was setting up a meeting with team owner Michael Andretti. A week later, they were sorting out the details of the three year-contract Veach eventually would sign.

“I think about how quickly this came together versus how long I’ve been trying, and it’s just unbelievable,” said Veach, who will be backed by Group One Thousand One, a recently rebranded insurance group headed by Towriss.

Veach, he said, is the epitome of what a company looks for in an ambassador.

“A lot of our business is built on this theme of empowerment,” said the CEO of a group that is reported to have $37 billion in assets. “Zach really represents that in taking the skills he had and making the most out of that. He’s so young and look what he’s been able to accomplish already.

“He’s got nearly a dozen wins in the lower circuits, but he’s also written a book and he’s constantly showing up in the community to give back any chance he can. That was a great fit with us. On one hand, he’s very driven to succeed, and on the other, he’s looking to give back in every way possible. What better person to represent our brand?”