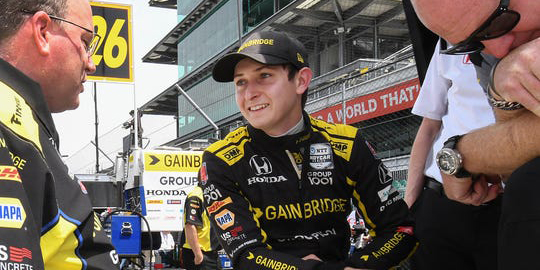 What better place to get it than back home at Mid-Ohio Sports Car Course?

Veach is in his second full season behind the wheel of an IndyCar, racing for Andretti Autosport. Just two years in, he is still looking for the checkered flag, but there is plenty of time left in what looks to be a very long career behind the wheel.

He still cannot help but envision win No. 1 coming at Mid-Ohio during the Honda Indy 200 this weekend.

“It would be incredible,” Veach said. “That is the goal at the end of the day. A win at Mid-Ohio would be a great spark for my career. I have raced at Mid-Ohio eight times now and I have never finished outside of the Top 10 so it is a place that has been very good to me in the past. This year has been the hardest year of my career. It seems like Murphy’s Law. If something goes wrong, more things go wrong. I don’t know if it is a sophomore slump or if it is just paying dues, but we are fighting tooth and nail to turn that around. It isn’t all that fun at times.”

Veach has a ton of success over his career at Mid-Ohio. During his three-year run in the Indy Lites Series, Veach had five Top 5 finishes at the historic track including a second-place finish in 2014. The success at Mid-Ohio transferred over to IndyCar when he finished 10th last season giving him a Top 10 finish in every race at Mid-Ohio during his career.

But what is it that makes Mid-Ohio such a successful track?

“Being home is part of it for sure,” Veach said. “Your family and your friends are there supporting you and you always want to perform well for them. It doesn’t add pressure, but you always want to put on a good show for them. It is a track that has always just felt natural to me. It has a ton of character with a lot of high-speed corners which I tend to gravitate to. It fits my style.”

As much of an impact Veach has made on the track, it is his work off the track that makes him a complete public figure. In 2010, when Veech was 16, he was named to CNN’s list of most intriguing people for his role as national spokesperson for FocusDriven, an initiative to fight distracted driving.

“That was back when I was 16 and I was doing a lot of things on anti-bullying and anti-texting while driving so they found me intriguing because not only was I trying to start my professional racing career, I was also trying to help others at the same time,” Veach said.

Nine years later, helping others is still very high on his priority list. His newest venture is with EverFi, an education initiative to help kids learn life lessons through sports.

“Helping people is still something we are passionate about,” Veach said. “We have a partnership with EverFi which produces media for public schools with the goal to teach students life lessons through sports. I am the first driver to have a STEM educational program in a public school. We teach kids about the different careers in motorsports as well as how we use math to go faster.”

What also makes Veach intriguing is the way his IndyCar Series career began. At the 2017 Honda Indy Grand Prix of Alabama, Veach was called upon as a last-minute replacement driver for the injured JR Hildebrand. Veach made the best of his opportunity, running in fourth place for part of the race before finishing 19th.

“That experience was baptism by fire,” Veach said. “Literally, the last time I drove a car before that moment was six months prior. That was one of the hardest weekends of my life physically and mentally. It was character building for sure. It was OK for the first time.”

It was a learning moment that led him to today. In just a year and a half, Veach has seven Top 10 finishes including two this year with two eighth place finishes at the Detroit Grand Prix.

But Veach isn’t satisfied with competing well and collecting Top 10 finishes; he wants to win.

“I don’t want to just compete in IndyCar racing,” Veach said. “I have always waned to be a front-runner. IndyCar has taken a little longer to grab than I would have liked, but this level of competition is very tough. We are working the hardest we ever have and every day to close that gap. We won’t stop until we do because this is my life and I don’t want this opportunity to be anything less that perfect.”